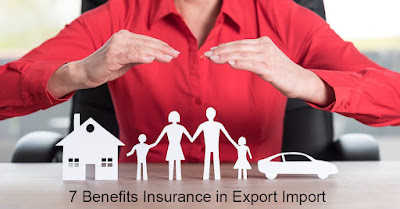 Import export activities become an important activity for a country. This activity is carried out to meet the needs of the country, and to sell the main commodities abroad to meet the needs of other countries.
The importance of export-import activities is also proportional to the risk that is quite high, the distance is quite far and the route to the destination country is not necessarily safe, increasing the risk of danger in export-import activities. From this it can be seen the importance of insurance for export and import activities.
Import export insurance is an insurance that provides protection to the Insured (Exporter) against the risk of not receiving part or all of the payment of export invoices from the Importer due to commercial risk or political risk.

The next benefit is Total Loss, meaning that the insurer will bear the loss if the goods are completely damaged (actual total loss) or repair costs to reach their original state exceed the actual price (constructive total loss).

3. Due to unexpected events

On the way to the destination country, unexpected events may occur that endanger the exported and imported goods. In this case the insurance will cover the loss or damage to the goods caused by this unexpected event.
These unforeseen events such as fire or explosion, the transport ship runs aground, stranded or sinks, the transport vehicle slips, goes off the rails, or overturns, the ship or transport vehicle collides with other objects (except water).
Then the events of unloading goods in emergency ports, intentional disposal of goods into the sea for ship rescue (Jettison), and sacrifices in general losses.

4. Due to natural disasters

In addition to unexpected events, threats that can endanger export-import activities can also come from natural disasters. This natural disaster is very likely to occur considering that it is impossible to predict which hemisphere will occur. With export-import insurance, the insurer will bear the loss due to this natural disaster.
These natural disasters include earthquakes, volcanic eruptions, tsunamis, lightning, and goods being washed away by the waves into the sea. Then the risk of the entry of sea water, lakes, or rivers into ships, containers, or places of accumulation of goods.
As well as the overall loss per kilo due to lost, thrown, or dropped during loading or unloading (loading or unloading)

The benefit of this expansion means that the benefits of import-export insurance include other risks that may occur. This benefit can be obtained by increasing the premium to complete import-export insurance.
In this case, the insurance company will cover losses for riots, strikes, riots, evil deeds of a person or group of people, up to the occurrence of war.

7. Gives a sense of security

In an insurance there is always a policy that is approved by the insurer and the policy owner. With this import-export insurance, exporters and importers can arrange insurance policies specifically or for a certain period of time. Here's the explanation:

Specific policies or special policies are types of policies that only apply to each time the shipment of imported export goods. Generally, this type of insurance policy is used by exporters or importers whose import-export trade transactions are not fixed.
For example, exporters or importers only carry out three or four import-export transactions each year.

Open policies or open policies are types of insurance policies for export-import goods that are valid for a certain period. With open policies, insurance guarantees can apply to all goods that are exported-imported during the period of the agreement, and are generally utilized by exporters and importers with a fairly large number of export-import transactions per certain period.
In open policies, proof that goods have been insured is stated in a certificate called an insurance certificate. The insurance certificate is prepared by the exporter with the form they receive from the insurance company each time the export-imported goods are shipped.
Then, the first sheet of this certificate will be used as a shipping document for imported export goods, as evidence that the imported export goods have been insured. An example of this type of policy is one year.

In export-import insurance, there are things that generally become the maximum limit of the insurance company's liability. Limits of liability of the insurer include:
All countries cannot meet the diverse needs of their own country. In addition, a country also needs additional income for the welfare of its people by selling its excessive natural wealth if only consumed within its own country. So, import and export are carried out.
In carrying out import-export activities, which are currently very important activities for several countries, it is also very important to use import-export insurance to be able to provide protection and minimize losses on imported-exported goods.